The Covid-19 pandemic requires us to bring many of our daily activities online.

We are all learning how to use new apps and communication technologies in place of our usual social contact, whether for professional, personal purposes and also to exercise our democratic rights as citizens.

We can’t limit democracy so it’s only exercised in “normal times”. In fact, it is even more necessary during times of crisis, such as the one we are experiencing now, which demands a broader debate and scrutiny of the decision-making process.

Parliamentary activity — such as representing the electorate, lawmaking process, and overseeing the government — is essential for life in democratic societies and to check the limits of executive power. However, in times of social distancing, it is necessary to find new ways to exercise this power. The solution, favoured by several legislative houses around the world, has been to implement  a remote system for parliaments to deliberate.

These solutions all share a common name, but this hides a wide variety of complexity in the systems: from simple systems that use video conference tools and private message apps to robust systems that allow lawmakers to get on with their duties almost in the same way that they would have before the pandemic.

According to Bússola Tech’s mapping, several Brazilian legislative houses — such as the House of Representatives, the Senate and São Paulo City Council — have developed a system for remote deliberations, with a growing number of Brazilian City Councils and State Assemblies also implementing solutions to maintain their activities in a virtual environment.

The House of Representatives in Brazil is on the state-of-the-art on developing this kind of solution.

Under the leadership of the Speaker Rodrigo Maia, on March 17th the House started working on a  solution to maintain its ability to vote and deliberate during the lockdown.

First, the resolution 14/2020 was drafted and approved to allow the team from the department of innovation and technology (Ditec) to start working on a solution. A week later, the first session of the new virtual floor took place in the House of Representatives with the participation of more than 500 members.

The main challenge was to design a solution that could accommodate 513 members in line with the House procedures. In other words, what was needed was more than a video conference tool. Developing this tool required the team behind it to incorporate features that could support the legislative process, with emphasis on two critical features: attendance registration and voting.

Security was immediately identified as a crucial element in the technological architecture. The solution had to be secure in order to guarantee the member’s representativeness, secrecy and authenticity.

As the floor sessions are public, cloud video conferencing technology was chosen, which speeded up its implementation.

New accounts (with users and passwords) were created so that members didn’t need to use their internal network account in the House of Representatives (which was possible via integration, but avoided for security reasons). To allow for verification and confidentiality in the voting record of the members, the system was designed to allow for digital separation between applications related to the legislative process and the video-conference service.

An external and private video-conference service, which could be kept separate from the tool to support voting, was chosen to be the interface for members coupled with the app Infoleg, which had already been developed. Launched in 2016, Infoleg was updated with new features for registering attendance and voting, which was custom built particularly to serve the demands of this new situation, and which only be viewed by members.

Infoleg, which had originally been developed so any citizen could follow what happens in the House, allows anyone to find information about members, proposals, the agenda of the House, and more. A set of functionalities was thus formed that would add value to parliamentary performance, going further than a simple application of digital voting (see image below). 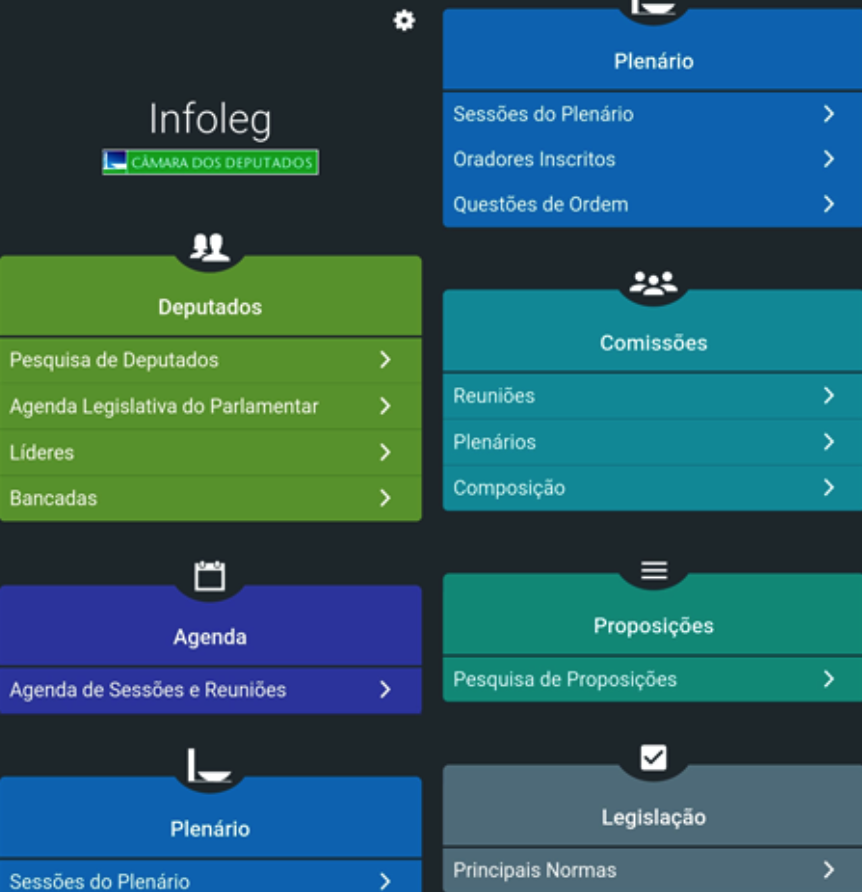 The registration of smartphones at the moment when members authenticate, made possible for a two-factor authentication system. The use of asymmetric cryptography (public and private keys) reinforced the compliance with the original security guidelines (see image below).

(How members vote in Infoleg)

Although votes are ultimately public, the system had to enable confidentiality and integrity until the voting process has been completed. In an effort to reproduce functionalities available on the real floor of the House, leadership guidance, presence and voting panels were added to Infoleg. 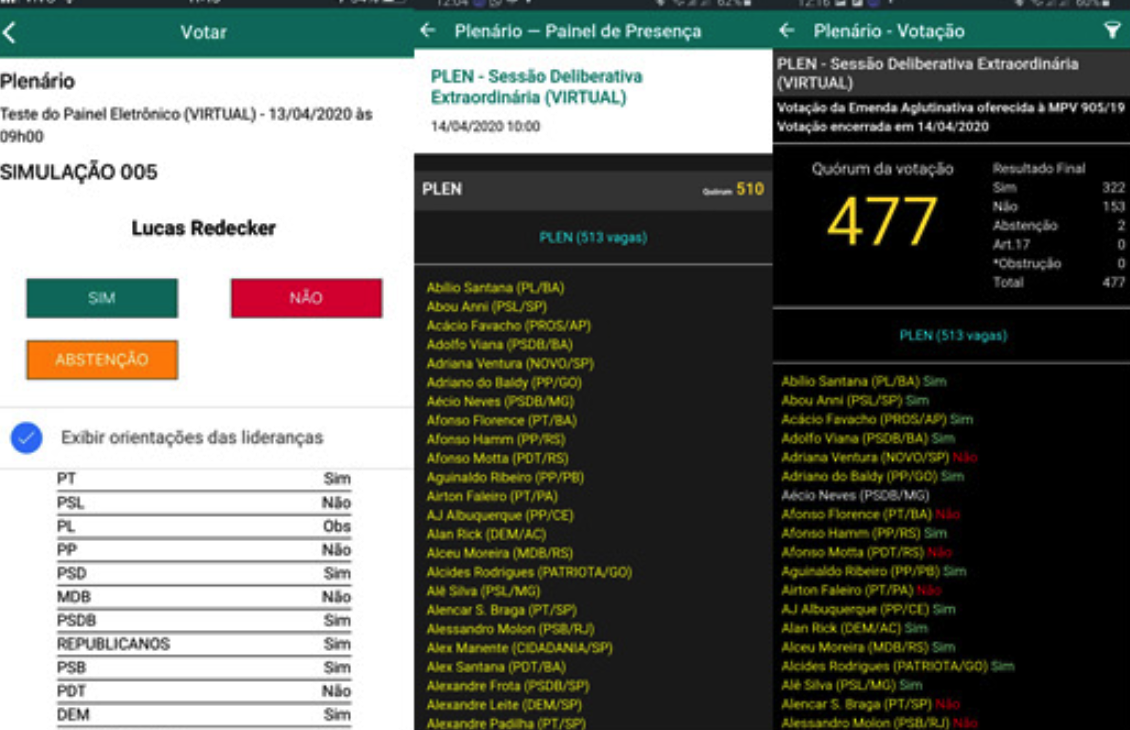 (Leadership guidelines, presence and voting panels on the Infoleg App)

The system relies on an authenticator that also allows members to introduce a law proposal or an amendment remotely. From the new system, bills and amendments receive digital authentication and follow the entire legislative process in digital format. This allows members to electronically sign the document before submitting it to members and collecting their signatures, in cases that require collective authorship. Thus, the process includes all the revisions in the committees up to the final voted version.

Getting Infoleg approved in app stores was challenging given the time pressure, so an alternative plan was created for the development of a web application for registering attendance and voting by members, which would only be used in case the application was not available in app stores. All App Stores approved the new version of the App in an unprecedented time, thus rendering the plan B unnecessary.

In order to keep the standards for the accountability of an open parliament, the data flows that support the transparency of the legislative process were maintained with full integration into internal systems. This ensured that the information was made available online on the Portal of the House of Representatives and in an API on the Open Data Portal.

Despite this crisis, the continuity of the legislative process was maintained in a dynamic, remote parliament.

The social distancing strategy used by governments to fight Covid-19 can take different forms, ranging from social distancing to lockdown. In Brazil we have employed a  hybrid system, with members on the physical floor of the House as well as the remote deliberation system. This allowed some of the dynamics to remain offline, such as political party leadership agreements. The infrastructure that has been built will be a legacy, and may well be used in future crises — for instance, sessions that are called as a matter of urgency, or due to health problems of members, regional problems, etc.

Preliminary results show a high rate of presence of members and a high frequency of sessions. While the first indicator depicts meetings with participation between 500 to 511 members; the second brings us almost daily frequencies of sessions, something which is absolutely new.

Some of the decisive factors that have made the virtual floor a success were the use of several modular technical systems, which increased the flexibility, and shortened the time spent to develop the new functionalities for the remote Plenary.

Undoubtedly, the decisions taken long before the crisis strengthened an innovative culture, based on the expertise in a series of products that could be quickly combined and adjusted to the challenge launched.

Parliament is more than a building, it’s a democratic value

The Israeli philosopher and Historian, Yuval Harari, has concluded that our ability to collaborate is the strongest comparative advantage our generation has in comparison with other previous generations that faced their own pandemics.

In the legislative community, this has been reinforced and realised by the countless conversations that have taken place about the technological architecture that is necessary to provide a virtual floor. A prominent example of this new movement is a group of more than 23 Legislative Houses distributed around the world, under the coordination of the House of Representatives in Brazil. This group allows a wide exchange of international legislative experiences among the Houses.

We have entered a new era in which flexibility is required of government, which, in turn, is essential for improving society. Public servants with the right skills are essential to respond to the  challenges like the one we are facing now.

A digital-ready and resilient legislative is essential to meet the expectations in times of crisis, in accordance with democratic rules. If the traditional way of doing things isn’t possible during this time of crisis, the legislative must adapt and keep exerting its Constitutional role to lead the debates while maintaining a check on the actions of the executive. To do this, creativity and collaboration are even more essential than complex technological tools.